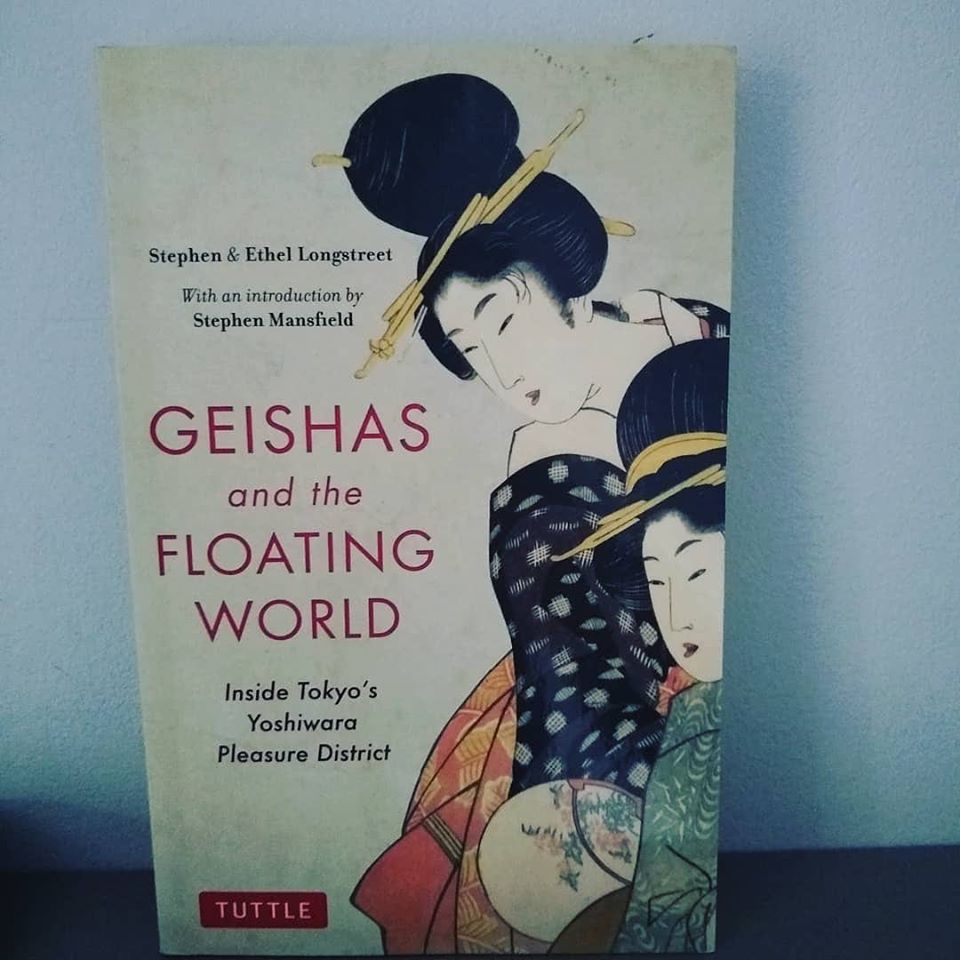 The geisha is one of the most famous images of Japanese culture. Elegant, mysterious and graceful, geisha have connotations with a romantic side of Japan that’s been perpetuated by myths and legends. The truth is a lot more complicated.

Stephen and Ethel Longstreet’s Geishas and The Floating World delves into the myths surrounding geisha and separate fact from fiction. The book charts the rise and fall of the infamous Yoshiwara districts that became a part of The Floating World and women’s roles within it.

The rise of the pleasure city

The Longstreets begin by examining the origins of the Yoshiwara in the 17th century. Translating to ‘Reed Moor’ from Chinese, the Japanese characters altered the meaning to ‘Joyful Moor,’ which became the marketing tactic of the brothel owners and crooked businessmen who owned the pleasure houses in the Yoshiwara.

A strict hierarchy of women existed in the district, with prostitutes and courtesans defined by classes such as omaagaki (first class) and daicho komise (third class). They were housed in lattice cages and men could take their pick of who they wanted to take to bed. This debauchery comes to life in vivid detail with the authors’ descriptive language and breaks through the romantic veneer that’s associated with the Floating World and the ukiyo-e/wood block paintings that captured the era.

At the centre of this hedonism was the geisha, who navigated the Yoshiwara as entertainers and artists. The book gives a precise description and clearly defines the differences between geisha and prostitutes.

“The word Gei translates as ‘art’ and the word Sha as ‘person.’ So, a geisha is a person of artistic talents: that of singing, reciting, making jests, entertaining, performing the tea ceremony, tickling the fatties among the guests, and whispering obscene jokes to jolly the customers. Their popular instrument, a sort of banjo, is called a samisen, the head of it said to be made of catskin, and it was first imported as a music-maker from Okinawa.”

“It was in the 17th century that the term geisha was first established in Edo, meaning a trade in singing and dancing entertainment. They were not by definition prostitutes and could not compete with the professional courtesans of the Yoshiwara at parties – against union rules. But they were sexually available, and to keep a geisha had a certain societal value, like collecting art has for the rich today in America.”

Living the life of a geisha

The book goes into detail about the elaborate ceremony that geishas went through to dress themselves and the kind of tragic relationships they developed. There are also mentions of real-life geisha, like Oyuki, who had a similar experience to the woman of the famous Madame Butterfly written by John Luther Long. Only her story was much more tragic and nuanced.

Interestingly, the book also provides details on the habits of hokan (male geisha), who were considered to be as debauched as the men who sought their company.

“The Yoshiwara hokan, known also as otoko (male) geishas, were not treated with much respect, nor held as high in esteem as female geisha. Their indecent prancing and phallic exhibitions were most in demand when a brothel-party was drunk and needed some way-out excitement to please the jaded guests, eyes rolling in expectancy.”

“Officially, the shogun government registered the Hokan as Embankment Coolies.  Some districts listed them as shampooers, insect destroyers, bailiffs, privy cleaners. All were gojomono – obstinate guys.”

Geishas And The Floating World really does do a remarkable job of capturing the essence of what life was like for the denizens of the pleasure city. In the modern day, the art of the geisha is a dying trade and while their history is tainted, they will always be remembered as stalwarts of a specific time in Japan.

Geishas And The Floating World is available for purchase through Tuttle Publishing.

4 thoughts on “Geishas And The Floating World Review: A Fascinating Read That Separates Myth From Reality”